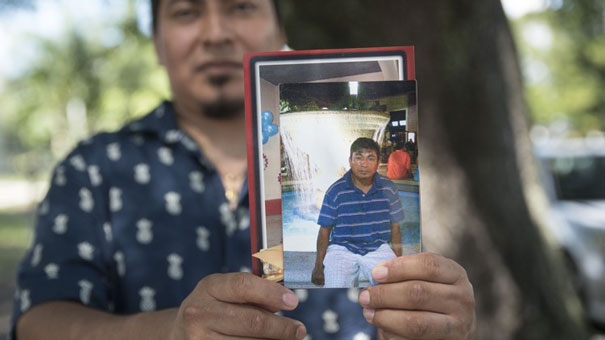 Thirty-two-year-old Harin Agustin poses for a portrait holding a photo of his older brother, Eugenio Danilo Agustin, in front of his West Palm Beach, Fla., home on Wednesday, August 16, 2017. On Monday, Eugenio and two other men were taken into custody by Border Patrol agents near the intersection of 44th Street and Broadway Avenue. (Andres Leiva / The Palm Beach Post)

West Palm Beach - For the past two years, Eugenio Augustin Guzaro stood curbside on 44th Street and Broadway in West Palm Beach and waited to secure work as a day laborer.

That routine ended Monday afternoon when Augustin Guzaro, 44, and two unidentified men were taken into custody on that same street corner by U.S. Border Patrol agents.

A border patrol spokesman confirmed that one of the men was arrested for presenting fraudulent identification and said the other two men would be detained pending a hearing before an immigration judge, but declined to provide further details.

A video taken by a witness hiding behind bushes show law enforcement agents searching a man and going through his bag before placing him unhandcuffed in a border patrol vehicle.

Harin Augustin said his brother is being held at the Krome detention center in Miami and is awaiting a court date with an immigration judge. The Augustins live together in West Palm Beach. Eugenio supports his wife and 18-year-old daughter in Guatemala, Harin said.

“This is horrible,” Harin said. “My brother is not a drug dealer or a criminal. He’s a hard worker.”

Aileen Josephs, an immigration attorney and advocate in West Palm Beach, said she was concerned about the men’s detention because it appeared to come absent of other criminal charges. A records check of individuals recently arrested in Palm Beach County on immigration-related charges shows most were apprehended initially on unconnected local charges.

Josephs said the men arrested Monday may have been racially profiled by the border agents.

“The question is, why did they ask them for documents?” Josephs said. “We don’t live in a communist country where you’re just standing in the street and border patrol can come and ask you for documents just because of the color of your skin.”

Immigration in the age of Trump: What it means for Palm Beach County

Josephs said that undocumented immigrants were targeted along the Broadway corridor during the first three years of the Obama Administration before the scrutiny leveled off.

But border patrol officials say they are within their rights to question individuals under the Immigration and Naturalization Act which authorizes any officer or agent without a warrant, “to interrogate any alien or person believed to be an alien as to his right to be or remain in the United States.”

The Trump Administration promised to go after illegal immigration, including those who have no black marks on their criminal record other than entering the U.S. without proper documentation.

Between Jan. 22 and April 29, ICE arrested 10,845 people whose lone crime was an immigration violation, according to the agency. That’s more than two times the 4,242 people arrested during the same time period in 2016 under Obama.

Further, of those arrested by ICE this year, nearly 75 percent had a criminal record compared to Obama’s final year in office when 92 percent of ICE arrestees were apprehended on non-related charges.

“I get asked a lot why we arrest somebody that’s not a criminal,” acting ICE director Thomas Homan told reporters earlier this year. “Those who do enter the country illegally, they do violate the law. That is a criminal act.”

How one family highlights the complex issue of immigration

Josephs acknowledges that border agents have the responsibility of enforcing the nation’s immigration laws, but said there are officers who “trample the U.S. Constitution” by profiling those only suspected of being undocumented.

The ACLU advises never to provide false documents or say you are a U.S. citizen if you are not, but adds that individuals are not required to answer agents’ questions or provide identification if they are approached on the street or in a public place.

“Ask if you are free to go,” according to the ACLU website. “If you are not free to go, you are under arrest and have the right to remain silent.”

Josephs said that is advice seldom heeded by the undocumented.

“They’re scared so they show them whatever documents they have,” Josephs said.

→ read the document on PDF format